The Importance of the Pause

Home/Uncategorised/The Importance of the Pause
Previous Next

The Importance of the Pause 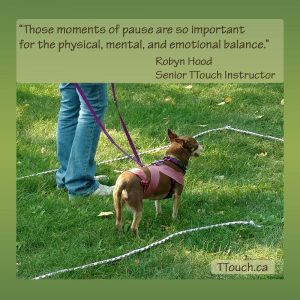 The Pause with a capital P is a simple but highly effective “tool” in all learning processes.  When we pause, we give the animal the chance to process and assimilate the recent experience in order to learn from it.  Sometimes we will find that after the pause a task which previously seemed impossible will simply flow  because we gave the animal time to “regroup” rather than forging ahead at all costs. When we work respecting the pace of each individual we can go further more quickly. As Napoleon once said, “Dress me slowly because I am in a hurry”.

The following quotation from the “In Search of Memory” underlines the importance of the pause in Tellington TTouch work. The key lies in the periods required for a memory to transition from short-term memory to long-term memory. The author, Eric Kandel, who won the Nobel prize for medicine, explains an experiment carried out by the German psychologists Georg Müller and Alfons Pilzecker in 1900.

Another experiment was carried our in a school where one group of pupils went from one class to another without a break whereas a aecond group had a short break between each class. At the end of the day the recall of the second group who had had a break between classes was superior to that of the first group.

This information is important not only for TTouch work but also for any form of training, agility etc. as the pause gives the animal time to process the information received or the experience.