Home/Uncategorised/Relief Vs Remorse
Previous Next

Yesterday Squeaky went into one of the travelling crates by herself and I was able to close the door. Until then she had only put her head and shoulders inside to reach the dish with food but yesterday I pushed the dish to the back of the crate. Of course, when she realised that she was closed in, she became frantic so I covered the crate with a towel to shut out the light. The vet had just arrived at the clinic and there were no other people waiting so I carried Squeaky over. Fortunately, the process of passing her from her crate to the vet’s went pretty smoothly. I heaved a sigh of relief because the neutering operation had to be done and until yesterday morning I had not had an opportunity to catch her, but at the same time I felt that I was betraying her confidence.

At lunchtime I was able to collect her again and bring her back home. I left the crate covered with the towel in a darkened room. After a couple of hours, I opened the door of the crate so she could come out. She was still groggy and not so steady on her feet, so I left her alone with a litter tray, some water and some food, although I realised that would probably not want to eat anything. I also left some essential oils, paticularly Rose, as a hysterectomy certainly qualifies as a traumatic event.

The interesting thing was that the kittens, who had been so playful and active, were completely disoriented when they saw that their mother was no longer around. The rug had been pulled out from under their feet, and their world was now unstable and insecure. They went up to the loft and spent the whole day there. They only went out for a few minutes in the afternoon but returned almost immediately. They were also completely silent and did not accept food all day.

In the evening, when I was able to close the garage door, I opened the door to the room,  and Squeaky began to miaow in a completely anguished tone. The kittens immediately recognised her voice and came running to the door. She then rushed out into the garage and fled up to the loft.

This morning she did not come to eat and went outside as soon as the door was opened. She really is a feral cat and I suppose that her survival instinct tells her to hide away. I have located her in tall grass behind a bush. The kittens did come for food but did not eat as much as they usually would.

In the late afternoon Squeaky came out from her hiding place and lay on the ground next to the car. She looked calm.

In the evening she came a little way into the garage and I put down some food for her, but the young ones also came, so she left because she did not want them to touch her. This is understandable because it must surely be painful.

When the swallows were inside and I could close the garage, I fed the young ones but Squeaky did not want to come in. I tried to coax her but did not force her. Eventually, as darkness began to fall, she made her way to the cider press and went in through a hole in the door. I blocked it off from the outside and then went in through another door to leave her some food. She was in a dark space but she called out to me to let me know where she was and I was able to put the food down near her. Her eyes were no longer afraid.

This morning I offered her some food but she did not take it, probably because she had eaten all the food I had left last night. She went out and hid under a clump of bushes which has always been a favourite spot since she turned up.

By mid-morning she had come out and came into the garage. I heard her calling and took down some food, but this time I took the precau 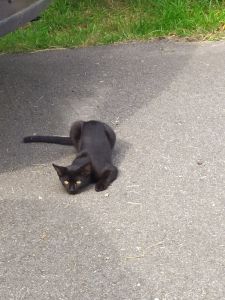 tion to have a separate dish for the young ones. She did not chase them away when they approached except when they went to her right side where she has the stitches.

In the evening Squeaky did come into the garage voluntarily and I fed her separately so that she would not have to contend with the young ones. However, she did approach the area where the crates are.

Later she looked more relaxed and certainly seemed to be recovering her normal behaviours as she began to take an interest again in the swallows when they arrived to roost for the night!

I noticed that she took some hemp oil — not much, just a few licks

This morning Squeaky ate with the young ones as she used to do but she would not tolerate them trying to take her food. She also ate the same raw food she liked before the operation. In the past couple of days she only wanted commercial wet food. 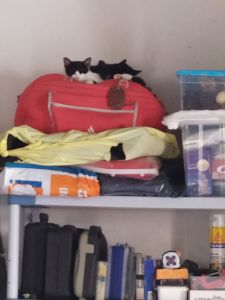 ew régime the young cats have been much less active outside and have found a new favourite spot to spend the day – on top of a bag on the top shelf in the garage.

Over the past two days Squeaky has clearly taken a couple of important decisions. The first is that — for the time being at least — humans are not to be trusted. She has refused to spend the night in the garage and would only come in to eat if the dish is placed near the door. At the slightest sign of human encroachment she leaves. This evening, however, she has come in to the usual spot to eat.

Last night Squeaky came into the garage and spent the night in the loft with the young ones. She also approached to be fed, so this is good news and hopefully is an indication of  a return to more normal behaviour.