Salma’s Learning Journey with the Ramp and Seesaw

Salma’s Learning Journey with the Ramp and Seesaw

Being used to Sasha who climbed up his ramp to the grooming table without a second thought, it brought me up short when Salma simply refused to even step on it. This reminded me that Sasha had been doing simple agility from puppyhood and accepted doing all kinds of strange things as part of normal routine.

As I don’t like the idea of dogs jumping on and off high surfaces, particularly as they age, I decided that I had to approach the ramp 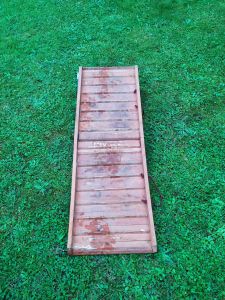 with Salma in a progressive w 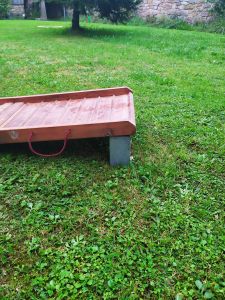 ay. First of all we laid it flat on the ground and in Homing Pigeon asked her to step on it. She did so voluntarily and was happy to have her reward for doing so. The next day we raised the stakes a little and raised one end of the ramp. She stepped on it quite happily. It has now been raised to about 13cm. and she is still finding that acceptable. Hopefully we will be able to build up the height while maintaining stability. The next step will be to see whether she can step on the ramp with only one person by her side.

Taking this work one step further I asked her to put one paw on the seesaw which she had so far been loathe to even approach. On day one she did put one paw on. She was rewarded for doing that, and I did not ask her to any more.

The following day we repeated the exercise in Homing Pigeon, and to my huge surprise she not only put a paw on the seesaw but actually stepped on it. That was definitely worth a prize and was a clear example of how what has been learned in one context, in this case the ramp, can be transferred to another! 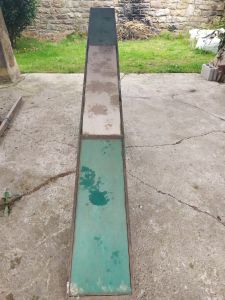 The next day, once again in Homing Pigeon which gives her a clear boundary on either side, I asked her to step on the seesaw. She climbed up and even tipped the balance. Of course, we steadied and slowed the tilt so that it would be more gradual. She was quite pleased with herself and accepted her reward.

Today she repeated the exercise and was more confident as she progressed up the ramp and activated the tilt at the top. This is great progress for her and I am sure it will greatly increase her confidence as she sees it as part of her confidence course with weaves, labyrinth and poles in star configuration.