All Things Great and Small

All Things Great and Small 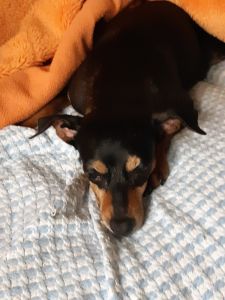 I can’t believe what has happened! Mimi, the little mini pinscher, died last night, Friday May 13th 2022, at 7.45pm. She was ten years old. She and her mother came to us when she was three when her foster Mum, a young woman of only forty-two, died of cancer.

She had a lovely walk on the beach in the morning and was lying on the sofa as she always did in the evening. I was preparing her remedy in the bathroom when I heard a scream. I rushed in and within 1 minute she was gone. I can’t believe it!!!

It is amazing just what a gaping chasm such a little being leaves behind, and it is the small things that seem to impact and are missed the most: the resounding thump she made when she jumped down from the sofa, the dancing and whirling as she waited excitedly for her meals, the characteristic rhythm as she came down the stairs. The house seems empty and forlorn.

When Mimi uttered that blood-curdling cry, Salma, who was lying on the floor in front of the sofa, almost jumped out of her skin. First of all, she moved away and then, full of agitation, came close in search of contact. Normally when the television was turned off at bedtime the sound was Mimi’s signal that it was time to go out and then, when she landed on the floor with a thump, that was Salma’s signal that it was time to go and she would get up too. Last night there was no thump, and Salma did not get up. I had to call her. Then when we went to the door, Mimi always went out first and Salma followed, but last night she did not go out. This morning she is following us around, disconcerted. Even although Mimi did not make much noise, her presence could be felt, and now there is an emptiness.

Our only consolation is that she did not suffer and now she is now resting beside her mother, Ophie, who died just under two years ago and Sasha, her great friend whom she followed everywhere.