What makes it all worthwhile

Home/Uncategorised/What makes it all worthwhile
Previous Next

What makes it all worthwhile 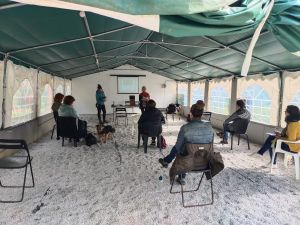 t the end of a one day workshop, particularly one on a topic such as reactivity which evokes so many emotions, it is a gift to hear a participant say that she is leaving with hope because she saw improvements in her dog throughout the day, and she could see that he was much calmer than when he arrived. This is what makes us want to continue!

However, the changes did not take place only in her dog. She also changed. When she arrived her lips were pursed, her jaw — in fact her whole body — was tense and her eyes were anything but relaxed. It is understandable that when people come to a workshop they are concerned about their dog’s behaviour and how other people will regard them. This often leads to harsh commands, lead jerking and a host of other gestures which only contribute to make the dog more anxious. At the end of the workshop her demeanour had completely changed. She was smiling and her smile reached her eyes. I am sure that this is a virtuous circle in a truly symbiotic relationship.

This lovely dog reacted to every change in the environment. He barked — loudly — and it took him a long time to settle again. As the day progressed, he barked less until at the end of the groundwork session he just gave out a solitary bark when something disturbed the peace. His recovery time also grew shorter and shorter.

In fact, all the participating dogs showed changes over the course of the day. One interesting thing that people became aware of is that we often have a fixed idea of how our dogs will behave, and then they show us that our preconceptions are often misplaced. We had a few incidents of that at the workshop too. Working with the beeline was wonderful for bringing out these aspects and also allowed people to observe how comfortable or uncomfortable their dogs were with a strange person. In some cases, the outcome was not quite what the participant had expected.

As always, the body wraps proved their worth once again. All the dogs were comfortable with them and showed decreased stress levels. Another technique which proved useful was chestline driving. India is a small dog but she can pull like a steam train. Using the chest line made her think again and she walked very nicely without pulling.